it's that time of year again 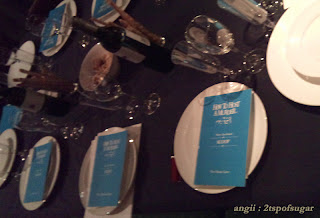 when my friends and i get together for another fun game of 'how to host a murder' over dinner. two years ago, we played the halloween one and this year, we decided for the 1920's themed 'chicago caper' murder mystery. once again, we partitioned the room with black sheets and set the table for ten and waited for the lovely guests to arrive... 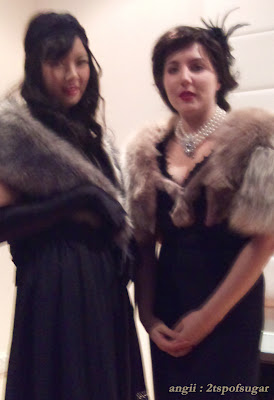 with a limited number of players, and a few too many friends, we decided to double up on characters. introducing silky m. adam, a 'slinky and shady lady who owns and operates the everlay club'. my friend rebecca and i decided to twin in black dresses, fur stoles and lovely long black gloves since we were playing the same character. unfortunately one of the other characters wasn't able to make it at the last minute and i had to change characters at the last minute and became the reporter malissa f. orrthot (aka, scoop). 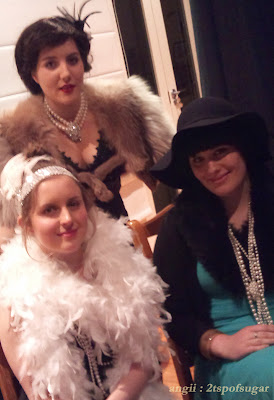 the murder mystery begins with one of the biggest chicago gang leader, hal cappone's disappearance and eventual death. eight characters that are linked to cappone gather together in a secret speakeasy to find the murderer. i'll try not to give too much of the solution away, but let's just say the murderer was one of these lovely ladies. who would have known, right? 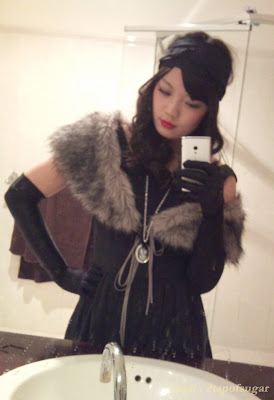 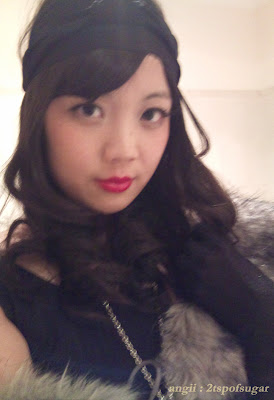 the only good photos i took were in the bathroom while getting ready. unfortunately the others turned out a little too blurry. here's my outfit, with pieces borrowed from my lovely sisters. to be honest, only the necklace, gloves and shoes were mine! it's good to be able to share clothes with sisters~ ah, that givenchy red lipstick was a little bit amazing~~
Posted by Angii at 21:47