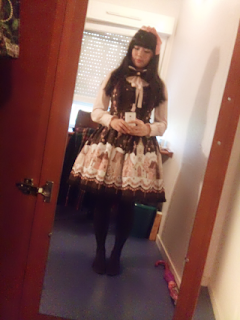 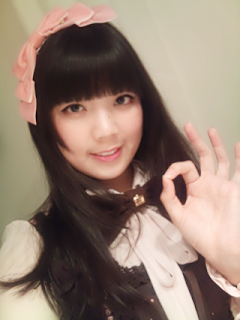 how did you spend your international lolita day? i was lucky enough to spend the saturday afternoon with my sisters in paris! i took the train in late thursday night to spend the weekend with them before they started their tour europe tour in rome. it was such a pleasure to see them in person after three months, and i even got to be their tour guide in paris~ we visited a few attractions since they'll be spending new years in paris again and i took them to the baby and angelic pretty stores too! i didn't buy anything (i've already bought my christmas present to myself) but my sister picked up a pretty baby barrette and a very petit petit beurre tag from the angelic pretty store.

unfortunately not everything ran smoothly. i made a huge error in reading my return train ticket and missed the train back to poitiers by 2 hours!! oops! (16:14 does not equal 06:14pm) i had to pay for another (full priced) ticket at the train station and wait another hour for the next train. and when i finally arrived at poitiers station, i realised the bus line i needed to take had already finished! so i had to fork out more money for a taxi back home (and avoid waiting another hour for the night bus) at least a hot shower and sleep were waiting for me. but now i miss my family more than ever!

i hope everyone else's international lolita day didn't have any mishaps like mine~ on the bright side, i did see my sister and we both had fun dressing up a little in paris! i wore my chocolierre jumperskirt by baby the stars shine bright to see them but because the weather is quite cold, it was mostly covered by my coat.

back to study!! i have an exam tomorrow - wish me luckk~