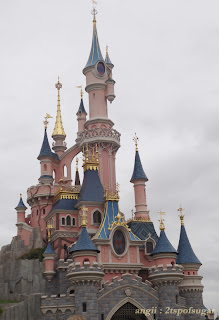 before i left adelaide, i'd pre booked our disneyland tickets which ended up half the price of buying them at the door! we were both very excited for the rides  and woke up very early to catch the early train and avoid lining up. unfortunately for me, long flights, late nights and dusty gardens was the perfect combination to bring on a cold! (in the middle of a european summer!) which meant i was feeling very groggy. i told myself this wouldn't get me down, because the disney magic would surely cure me, right? 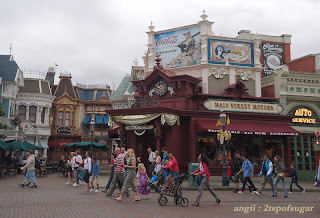 we entered the park about 15minutes before opening and already there were many people waiting outside the entrances to the four different parts. we started at the big thunder mountain ride and then the indiana jones et le temple du peril ride. but soon found out that parc disneyland didn't have as many thrilling rides! the streets were mostly lined with merchandise stands and various food stands and restaurants. admittedly, i was a little disappointed. not to mention the wait for the two most exciting rides were as long as 60minutes and my friend and i weren't so keen on waiting so long for a 1minute ride. we ended up eating lunch at a mexican restaurant in adventureland before taking a long browse through the merchandise shops along main street but i wasn't impressed and we left with no souvenirs and sad faces. 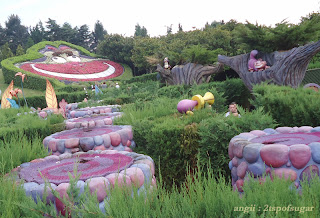 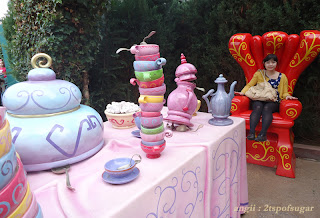 this was a cute little garden with the cheshire cat's face. and i got a photo at the mad tea party table too! it was very much for young children, but i'm such a huge alice in wonderland fan, especially the mad hatter! my favourite character~~

when we returned to the apartment we checked the disneyland map and realised that there were many more rides at disneyland studio (the half we thought wasn't worth exploring so we didn't buy tickets with entry to this side). in this case, the grass really was greener on the other side! (i slept the rest of the day away because i was starting to feel really ill)
Posted by Angii at 00:33

Email ThisBlogThis!Share to TwitterShare to FacebookShare to Pinterest
Labels: other: france, other: travels